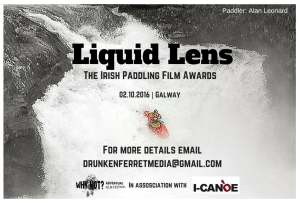 See your Irish paddling film on the big screen!

This is an paddling film event specifically for the Irish paddling community. Sea kayaker’s,freestylers, creekers, surf-kayakers, wave-skiers, open boaters, weekend warriors. We want you to submit your paddling film.

It doesn’t have to be pretty. It just needs to tell a story.

Prizes on the day for film category winners.