After the recent slalom action Canoe Sprint, too, made a very welcome return to international competition. With the season kicking off with a World Cup race in Szeged, Hungary, from the 25th-27th of September.

Team Ireland had only one competitor attending, Barry Watkins, who was racing the in the K1 500m and 1000m. While many teams had elected to not travel to the event the field was still awash with heavy hitters, World, European and Olympic Champions. The first race of the event for Watkins was Friday morning for the blue ribbon K1 1000m. Conditions on the morning were very difficult, with a strong headwind slowing down the times and leaving the course choppy and hard to run smoothly on. In the 2nd heat of the qualifying round Barry battled through these conditions to come home in a 3:58.7 to take 5th place in his heat and qualification to the afternoons semi final. Conditions were no better for the 500m later in the morning, with Barry finishing the tricky race in 1:56.2 to take an impressive 2nd in his heat and another semi final spot.

The conditions did not improve for the afternoons semi finals, making Watkins racing harder again, battling conditions which were not to his favour or liking. In the 1000m semi final Barry made what was a characteristic strong finish to come across the line in 4:01.92, 4.09 seconds from a spot in the final, Saturdays B final in the 1000m awaited. The 500m provided a similar story, make a late surge to finish in 5th place in an extremely competitive semi final, featuring 2 athletes who would go on to take medals in the A Final, in Fernando Pimenta (POR) and Balint Kopasz (HUN). 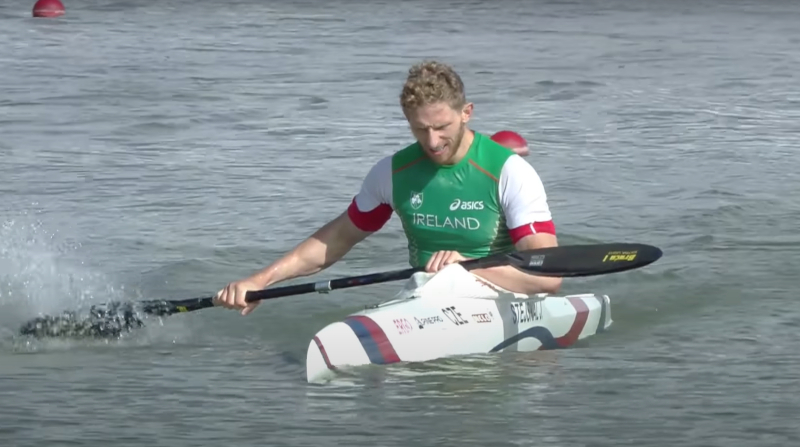 Finals day on Saturday provided significantly better conditions, which proved to be a big boost for Team Ireland. In the B Final of the 500m Barry brought another massively strong finish, picking off the entire field to win the B Final, in a time of 1:44.36. Leaving him 10th overall for the World Cup. It was to be a very difficult day from there on with a very short turn around to get recovered and ready to race the 1000m B Final half an hour later. In the B Final Barry would go on to finish 6th in a time 3:52.26.

As always in sport it was a weekend of ups and downs with some great racing on display from our Irish athlete, and definitely a long overdue return to competition.