Garda Peter Egan a member of the Salmon Leap Canoe Club, Leixlip, County Kildare and stationed at Tallaght Garda station, which took place at a function held in Fitzpatrick Castle Hotel, Killiney on Friday the 20th of November.

The awards are sponsored by St. Raphael’s Garda Credit Union.

were held in Baku, Azerbaijan.

He was also a semi-finalist at the World Sprint Championships in Milan, Italy in August.

Among the other award winners were Olympian boxer Adam Nolan and Niamh Briggs captain of the Irish Women’s Rugby Team. 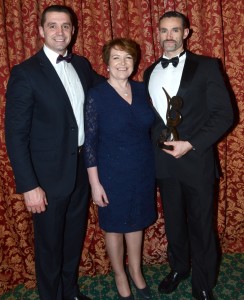